Well…We’ve done it! Season 7 is in the can and there isnt a damn thing any one of you can do to take that away from me! Seriously; this seasons been an absolute blast to work on and i’ve got to hang around with some super cool people and make some really nice things…It’s just a shame that this is the movie the seasons going out on.

Yes “Return to Sleepaway Camp” a movie so painful and irritating to sit through I liken it to repeatedly smacking yourself in the clitoris or balls with a housebrick. all the charm is gone, all the nice plot twists and one liners; gone. this is an irrideamable piece of trash in my opinion. EASILY the worst film of this season hands down by a country mile. I will NEVER watch this film again willingly. and if you guys have any sense, neither will you. such a sad way to end what was ultimately a pretty alright franchise. I really hope at some point it gets another crack at the whip to try and right this travesty…because at this point? I wouldnt even put this in the same leage as latter day full moon features…and their movies…holy shit.

Anyway! Im done! go get some sunshine, go eat ice cream, enjoy your summer! I’ll be back in september with some more fun and games (Plus there’ll be plenty of goodies going up in the interim…dont think im leaving my channel barren) and i’ll see all you hot dogs and cool cats in the autumn

(FUCKING AWFUL POSTER DO NOT WANT.)

So! a bit or a rarity! this week we’re doing double bubble! it’s been a VERY long time since I covered 2 movies in one review. in fact the last time was way back in Season 2 when I covered both versions of the “Night of the Living Dead” movies.

And todays is extra special because we’re not only covering 2 movies in one review! we’re covering 2 movies, 1 of which has never had a proper “PROPER” official release. Yes yes; there has been a cobbled together fan edit that attempts to complete it…but honestly? it’s a bit limp. I have to tread extra carefully around movies that never got completed as copyright law is slightly different for “Unifinished” works than completed ones.

Even so; I really did feel a bit like I was short changing you guys with my review of Sleepaway Camp 3 with this one. “It’s basically Sleepaway camp 2 again” is hardly the most inspired take for this one. and I was left in a bit of a dilemma as to; A: whether there was enough material to even MAKE a full length review for Sleepaway Camp 4 and B: Whether a trunkated review for sleepaway camp 3 would fly. As such it became quite apparent that the best thing to do with 2 stubby reviews that dont quite meet the usual goals and standards would be to push them together into a not so stubby double feature and treat SC4 as a bit of an addendum and ending to the production company “Double Helix films”.

Honestly?; While theres nothing inherently wrong with sleepaway camp 3, the fact that it’s basically more of the same always makes it difficult for me to appreciate this movie in the same way I do the original or Sleepaway camp 2. and Sleepaway camp 4 is missing so much information, that quite honestly? I feel bad for even talking about it. im only really doing it for completionist sake and because next week?…well it’s the season finale…and…oh god….even thinking about it’s making the space behind my eyes itch.

I enjoy Sleepaway Camp 2 for almost the exact polar opposite reasons I enjoyed the first Sleepaway camp movie. Where that film relied on subtlety masked by some bombastic performances and a BIG TWIST ENDING that has come to pretty much define the movie altogether. This films loud, stupid, garish, blatant and critically; NOT to be taken seriously by any stretch of the imagination. It feels like a film that would exist inside another film, Like; I could see this movie easily playing in the background of a scene in Robocop or “The Last Action Hero” or something of that ilk. it doesnt feel like a real movie…and yet here we are.

Because of it’s total outlandishness I really warmed to this movie. It was the first sleepaway camp film I saw via “The Horror Channel” in the UK around the turn of the millenium and I’d honestly put this one joint first with the original for my most loved sleepaway camp movie. in the context of the slasher genre this is awful! but for a macarbre horror comedy with gore and gallows humour. I totally dig it!

With 2 weeks left to go now until the season finishes, I hope you’ll join us next week as we take a deep dive into “Sleepaway Camp 3: Teenage Wasteland” and “Sleepaway Camp 4: The Survivor”!

(This poster always confused me. Why have all the slasher references?, why shoot some random actress just because Pamela Springstein was unavaialble on the shoot day?…why continue to call it nightmare vacation in the UK?…its a messy poster…iconic…but messy) 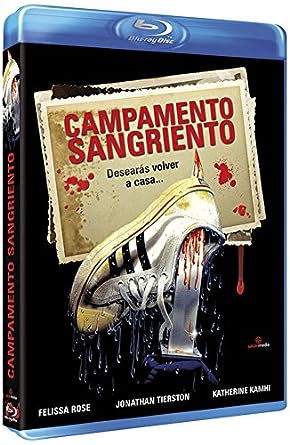